skip to main | skip to sidebar

“Dire” is a Visayan word for “here” and “Husi“ is a Manobo word for “friend.”

We are a youth organization, a creative social enterprise, an artisan collective, a band of world musicians, a training hub, and a fair trade advocate.

If that already sounds a bagful, wait and see, because we believe that with faith and dreams, we could be so much more.

Street kid turned missionary: The story of Paulo (This is a story of how a street child overcame all challenges and became a missionary for others ) by: Bobby Lagsa

CAGAYAN DE ORO, Philippines – When Florante “Paulo” Talampas was just a baby, he was sold by his drunkard father to Wennie and Beth Luna for P500 ($11.26) to buy liquor.
Born to Florante, Sr., and to Elena, a mother he never met, Paulo lived a life full of strife and tribulation.
“I never knew my father, and I never met my mother. I was between homes and rescue centers, and spent 10 years of my childhood life in the streets,” Paulo said.
Wennie and Beth Luna took care of him as a baby. He was, however, eventually transferred to Beth’s sister, Daisy Galendez. When Paulo was 3 years old, the Galendezes had a baby. Everything then changed.
“I was treated cruelly by Daisy, but uncle Romy was kind to me,” Paulo recalled.
When he was 6 years old, he got lost during one of his walks in the city. Paulo stayed in the park until he was taken by the rescue staff of the city government-owned Tahanan ng Kabataan.
He stayed there for weeks until one of the kids asked him to join their escape. He ended up in the streets of Divisoria. Paulo recalled that he was again rescued and sent to the House of Love, a rescue center where he spent a year. 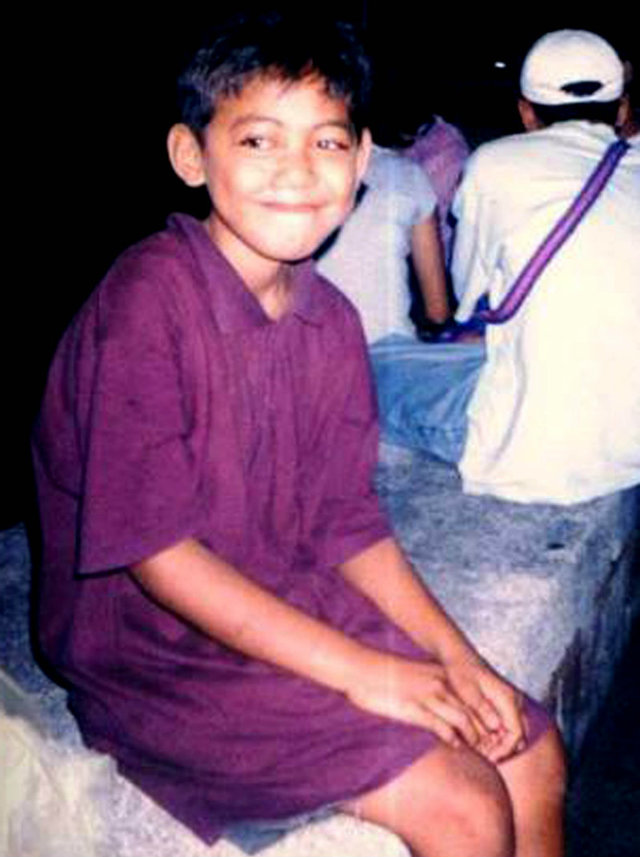 Florante Talampas' photo as a street child in Plaza Divisoria, Cagayan de Oro City.
Paulo’s adoptive parents refused him when he was brought back to their home. He was told of his true identity. They told him it was better for him to stay with the shelter.
“I was told of my real identity, who my father, my younger brother and my older sister,” Paulo said.
In 2000, the 8-year old Paulo then hit the streets of Cagayan de Oro City, marking the start of his 10-year journey of, in his own term, “God’s preservation of me for a purpose”.
Different from the rest
Paulo shared that he feels different from the other street children, like Rusty Quintana whom he became friends with.
“The other street children will do drugs after we get some money from scavenging. I, on the other, hand would spend my money in the Internet café, reading, and playing games,” Paulo said.
He was addicted to video games. That was his drug. The Internet cafés also provided him shelter at night.
After a scavenging run, and selling their finds, Paulo would set aside money for food, “while the other street children would just disappear,” Paulo said.
Paulo said that when he has no money, the only way to satisfy his hunger was to scavenge food from the garbage. (Read: Meal of the day: 'Pagpag')
“We would dig for fried chicken, burger … That was very tough,” Paulo recalled.
Life with Deri Husi
Like his friend Rusty Quintana, in 2010, he would spend time in Deri Husi halfway house in Barangay (village) Nazareth together with other stowaways.
Rhyan Casino, founder and executive director of Deri Husi Initiative said that Paulo is an “overcomer,” someone who takes decisive actions to change their lives.
At the Deri Husi, Paulo learned to use art as a transformation tool. Paulo and Rusty would do human statue, fire dancing, crafts, paintings and percussions. Paulo also learned how to beatbox, and was elected as president of the Oro BeatBox.
“I gained some insight on leadership as the president. We found gigs and earned some. We learned new skills and incorporate that in our group,” Paulo added.
Life for a mission
When Typhoon Sendong (Washi) destroyed the home of the Lunas, Paulo, volunteered to look after their tent in an evacuation center.
There, Paulo met missionaries and pastors that would change his life.
Paulo said that Pastor Jun Managantan caught his attention. He found himself looking forward to their activities at the evacuation center.
Pastor Managantan then suggested to Paulo that he join the 2012 summer youth camp with the Teens Mission International in Buenavista, Agusan del Norte. In June 2012, Paulo joined the institution as a full-time student taking a diploma in the Bible.
Life in teen mission international
Paulo came to appreciate his life as he was studying at the TMI.
“We were provided food and shelter for free as students, but we need to source our own allowances,” Paulo said. 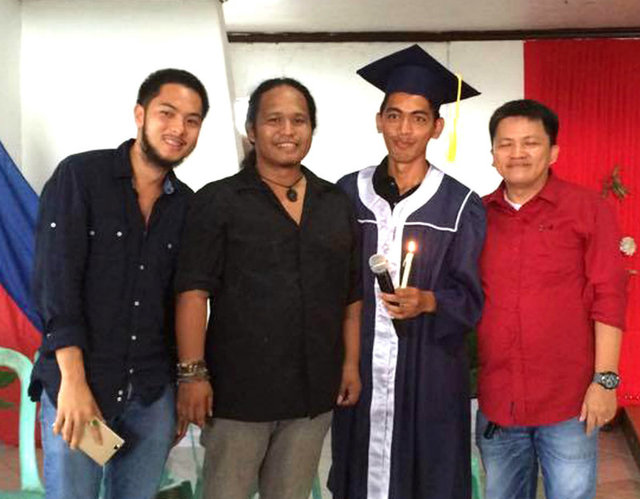 Florante Talampas during his graduation at the Teens Mission International in Buenavista, Agusan del Norte.
“God preserved me while I was in the streets, for a purpose only God knows,” Paulo said.
He added that life in the streets is a constant battle to stay alive.
“Anytime you can get killed. You can get sick. You can get arrested,” Paulo said. He came to appreciate life as a missionary, too
“I almost gave up while at the school. I have no money, it was so depressing. I have nothing to buy for my own hygiene,” Paulo said.
“You know that verse, 'Seek ye first the kingdom of God and all his richness will be bestowed upon you?' That is God’s promise that there will be abundance,” Paulo said.
“By the grace of God and by faith, some friends have contributed for my allowances, especially Rhyan,” Paulo said.
Paulo added that there were times during his missionary works when he had to walk for hours because he had no fare.
But that long walk also provided him some solitary time to commune with God. “The pastors prayed for me. They give me encouragement. They give me the moral support,” Paulo said.
On May 10, 2015, Paulo graduated at the TMI with a Diploma in Ministerial works, a 3-year course that led him to a life as a missionary.
Preparing for missionary work
“I am preparing to do God’s work, to be a preacher and organizer,” Paulo said with a smile.
Rhyan said that Paulo has a longing to get out, that in just one week, he was already able to organize the children in the community as his first project.
“I want to do children ministry, or be a pioneer and start my own church,” Paulo said.
Paulo is also planning to take the Alternative Learning System (ALS) of the Department of Education so he would qualify to take up theology. Paulo also hopes to visit his mother whom he never met in Davao.
“I am excited to meet her, and make her proud of what I made of myself,” Paulo said.
Paulo is now waiting for the approval to work with Youth with a Mission (YWAM) as missionary worker.
“This life as a missionary, I am excited for it. God has kept me safe all my life for this purpose, to serve and glorify him,” Paulo said. - Rappler.com
at 9:17 PM No comments: